It started as an idea on a chalkboard in late 2015, during the early days of Cowbell Brewing. We were in the late planning stages for the architecture and equipment at Canada’s Destination Brewery, as well as planning the first beer launch. There was a lot going on. In the middle of all the excitement, an idea came to life for a beer that would be brewed upon opening the brewery, and not to be seen in a glass or sipped for a few years. But once ready, would be enjoyed for years to come.

It was a risky idea without any assured success. Even speaking about it at the time seemed like a bit of nonsense considering the ground had not yet been broken. But that was the time to talk about it, there was no other option. Four years before its launch, a decision was made to modify the architecture and invest in purpose-built tanks. In late 2015, we set out to create a unique beer for which we would wait patiently and which would launch in late 2019. The Reunion would happen.

SOLERA
Solera is a process also known as fractional blending that is most commonly used in the production of sherry, brandy, some port wines, and authentic balsamic vinegar. In a Solera, young wine (or spirit, vinegar, etc.) is blended annually with old wine, then old wine with older wine, then older wine with even older wine. After a period of ageing, some of that blend is packaged and released, and additional younger wine is added to it to mature until the next release. The finished product is always a blend of old and young wines which have matured together to create complexity, depth and romance.

A sherry solera is a very delicate balance of differing ages of wines and barrels at specific quantities. The graphic can really help to explain the process – but very simply, in a single bottling of solera wine, annually a portion of it is removed and released while at the same time, a younger batch is infused into the barrel taking the place of what was just bottled. This released wine is known as the Solera, which is an ever evolving marriage of old and young maturing wines.

The Cowbell team were excited about the idea of a solera-style beer. We would brew the first Anniversary Beer on opening day, and release 50% of it on Cowbell’s 1st Anniversary. At the time of the 1st Anniversary, brewing of the second Anniversary Beer would take place, aging 50% on its own, and blending the other half with the remaining Anniversary Beer from the previous year – thus beginning the Solera. This would be a genuine and unique representation of time, effort, and expertise at the Cowbell Farm. A perfect tribute to the Cowbell brand.

REUNION 1st SOLERA VINTAGE
Our vision was to create an annual beer to celebrate Cowbell’s Anniversary and history for years to come. A beer that would itself be a true representation of the year it is commemorating, while at the same time paying respect to all the hard work and dedication that came before it. The individual beers themselves had to be excellent, compelling and strong. Higher alcohol beers are not only generally more flavourful and contemplative, but the alcohol provides preservative characteristics, helping the beer age gracefully like a fine wine or port.

The starting point would be Almanac, our Anniversary Beer that has now enjoyed its second release. The first beer was brewed on the very first day Cowbell opened its doors to the public, August 3rd, 2017. We brewed 100HL of an 11.7% ABV Barleywine, fermented it in one of our stainless tanks in the cellar, and then transferred the entire amount to the black Reunion fermenter that is nestled within the spiral staircase in the heart of the Cowbell Farm. This Barleywine would rest there for the entire first year, maturing just as we did until its eventual launch on August 3rd, 2018, as Almanac 2018 Barleywine, our first Anniversary Beer. This beer genuinely represents all the successes and challenges of that first year as a liquid tribute to Year 1 at the Farm.

When the beer was packaged, 50HL was removed from that original 100HL of Barleywine, leaving room for a solera blend addition. On our first anniversary in 2018, we released Almanac 2018, and brewed the next Almanac Anniversary Beer, 100HL of an 11.3% ABV Imperial Stout. That 100HL fermented in the cellar just like the first, then when ready, 50HL was transferred to a smaller black Almanac fermenter in the back of the cellar, which would rest and mature for the entire second year, eventually being released on August 2nd, 2019 as our second Anniversary Beer, Almanac 2019 Imperial Stout.

The remaining 50HL of Imperial Stout was blended back into the Reunion tank, added to the now one-year old Barleywine remaining from Almanac 2018. This would begin the evolution of our solera-style Anniversary Beer, Reunion. For the next year, the two beers would marry their flavours until finally released on November 22nd, 2019, as Cowbell’s Reunion 1st Solera Vintage.

Reunion 2019, our very first Solera Vintage is a blend that is 50% two-year old Barleywine, and 50% one-year old Imperial Stout. The beer was hand packed and bottle conditioned with fresh yeast. If stored cool and dark, this bottle will mature and evolve over the next ten years, or possibly more. It is the very beginning of a beer that will continue to evolve every year, and a story that the black Reunion fermenter will foster every year. That tank will never again be emptied completely. 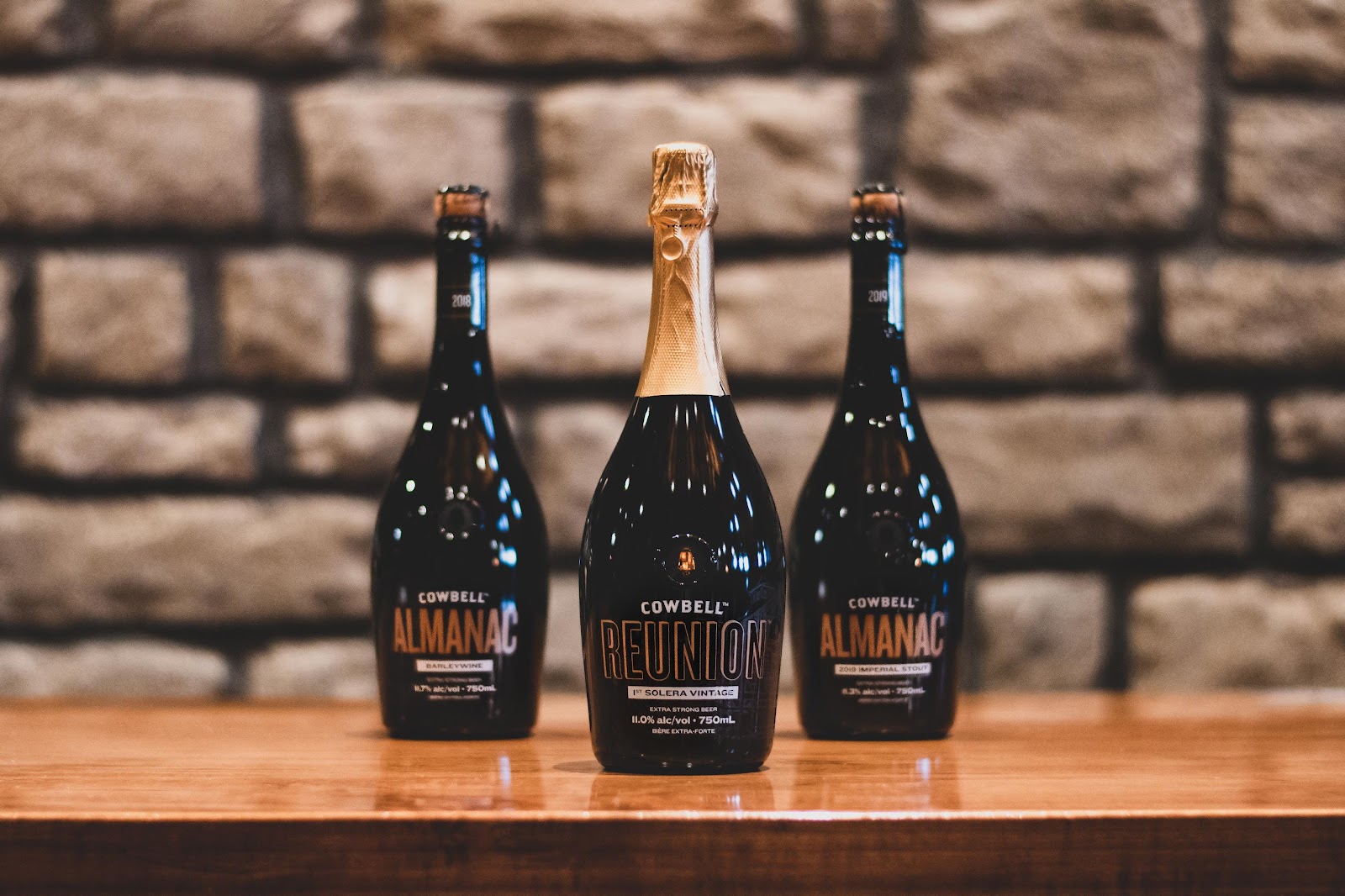 Reunion 1st Solera Vintage in front, flanked by Almanac 2018 Barleywine and Almanac 2019 Imperial Stout, the two even components in Reunion. Each bottle is hand filled, corked, and wire-hooded to create an excellent closure, optimal environment for bottle maturation, and an exciting presentation. 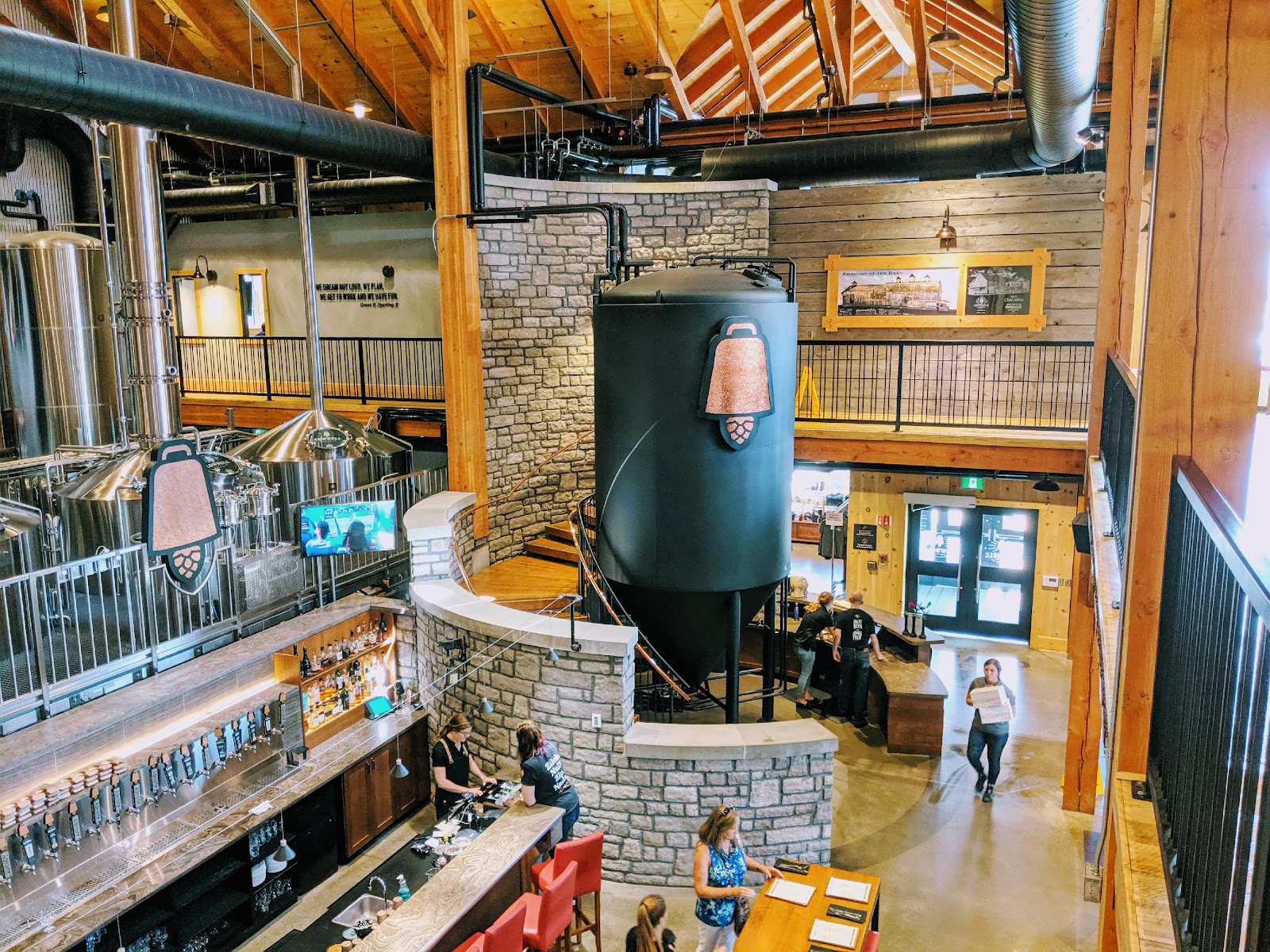